A collection of my favorite logical puzzles

I have heard a lot of logical puzzles over the years, and I have now compiled a list of my favorite ones. None of these puzzles have dumb answers, nor do they require a PhD in mathematics to solve. Most of them are probably well known, but I have rewritten them in my own words. If anyone has any input to more cool puzzle, then reach out!

xkcd.com's infamous Blue Eyes puzzle is hard, mind bending and beautiful. I have written an article about this puzzle before, where I presented my version of the puzzle text, my explanation of the official solution and my alternative solution. Check it out here.

The King and his Servants

A king has 100 servants and wants to find out how smart they are. He says to them that they will be getting a hat that is randomly either red or blue placed on their head. They will then be standing in a line, facing the back of the head to the one in front of them. Starting from the servant in the back, the king will ask them which color they have on their hat. If they answer wrong, the servant would be shot. The amount of red and blue hats are random, and they cannot see their own hat color, but they can see every hat in front of them. They can also hear what the person behind them answered. They cannot communicate while standing there, other than answering "red" or "blue", but they can come up with a strategy beforehand to make as many survive as possible. How can they guarantee that 99 servants has 100% chance of surviving?

Three Guys at the Hotel

Three men goes to the reception of a hotel to get a room. The clerk says it costs $30 and each men gives the clerk $10. The men goes up to the room, but now the clerk remembers that the room is for sale right now and costs only $25. He then sends $5 with the bellboy up to the room to give to the men. The bellboy thinks that he can't divide $5 on three men, so he keeps $2 for himself and give the men $1 each.

The Blind Man with the Pills

A blind man has 4 pills in his pocket. 2 red and 2 blue. He must swallow 1 red and 1 blue pill to survive. If he swallows two of the same color, he dies. He is alone. No one can help him. The pills has the same texture and smell. Time isn't really an issue, but let's say he has 2 minutes to swallow the correct pills before he dies. How can he guarantee that he survives?

A mountain climber is on top of a mountain which is 200 meters tall. 100 meters below him is a platform he can stand on. Both the top of the mountain and the platform has a hook he can tie a rope to. The climber has a knife and a rope that is 150 meters long. How can he get all the way down? Note that he cannot jump several meters down and the rope needed to tie knots is too insignificant to matter. 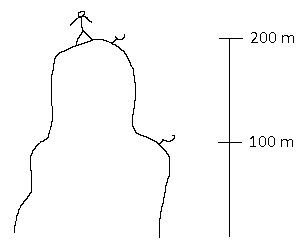 This is more of a programming puzzle, but doesn't really require much programming skills. The task is simple: Two variables (a and b) can have any single value, be it a digit or a character. Swap the values of these variables without using any existing functions, arrays or creating new variables. Also, a,b=b,a is not allowed, as you can do in Python. I have verified that it works in C/C++, PHP and Perl, so think in C-style languages.

You are on the way to the beautiful city Oslo and are at a crossroads, where the road splits in two. You don't know the way. However, there are two brothers living next to the road who knows. One of them always tells the truth and the other one always lies. You don't know who is who and you can ask one of them only one question. What can you ask to get in the right direction to Oslo?

Imagine that the following lines are matchsticks. The task it to move two of them to form 4 equally big fully squares, with no spare parts and no partial squares. 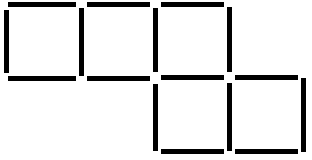 Make the equation 5+5+5=550 valid by drawing one straight line anywhere. Note that it is not allowed to draw a line over the equal sign.

The Man and the Window